As the Army Chiefs explained so well during their presentations at this year’s DSEI conference, achieving resilient, durable, long-term security for ourselves and our allies in both the immediate future and in the long-term requires our politicians to embrace the ongoing paradigm shift from territorial, national, hardware-based military operations and the assumptions of a critical distinction between internal peace and external conflict, to the full spectrum effects of a complex data-driven environment where the political and military are two facets of the same operation, and where deep integration and cooperation with our European and NATO allies is not simply an option, but an indispensable requirement for success. Instead, Prime Minister Cameron continues to incoherently and irresponsibly push the national sovereignty card on the military level whilst putting at grave risk the territorial integrity of the UK by holding a referendum on UK membership in the EU that could well result – with or without his approval – in Britain’s exit from the European Union and which would then inevitably lead, as his own former External Affairs Minister and one-time leader of the Tory Party, William Hague, clearly recognized, to Scotland’s departure from the Union following a successful independence vote in the not-to-distant future: "To end up destroying the United Kingdom and gravely weakening the European Union would not be a very clever day's work." 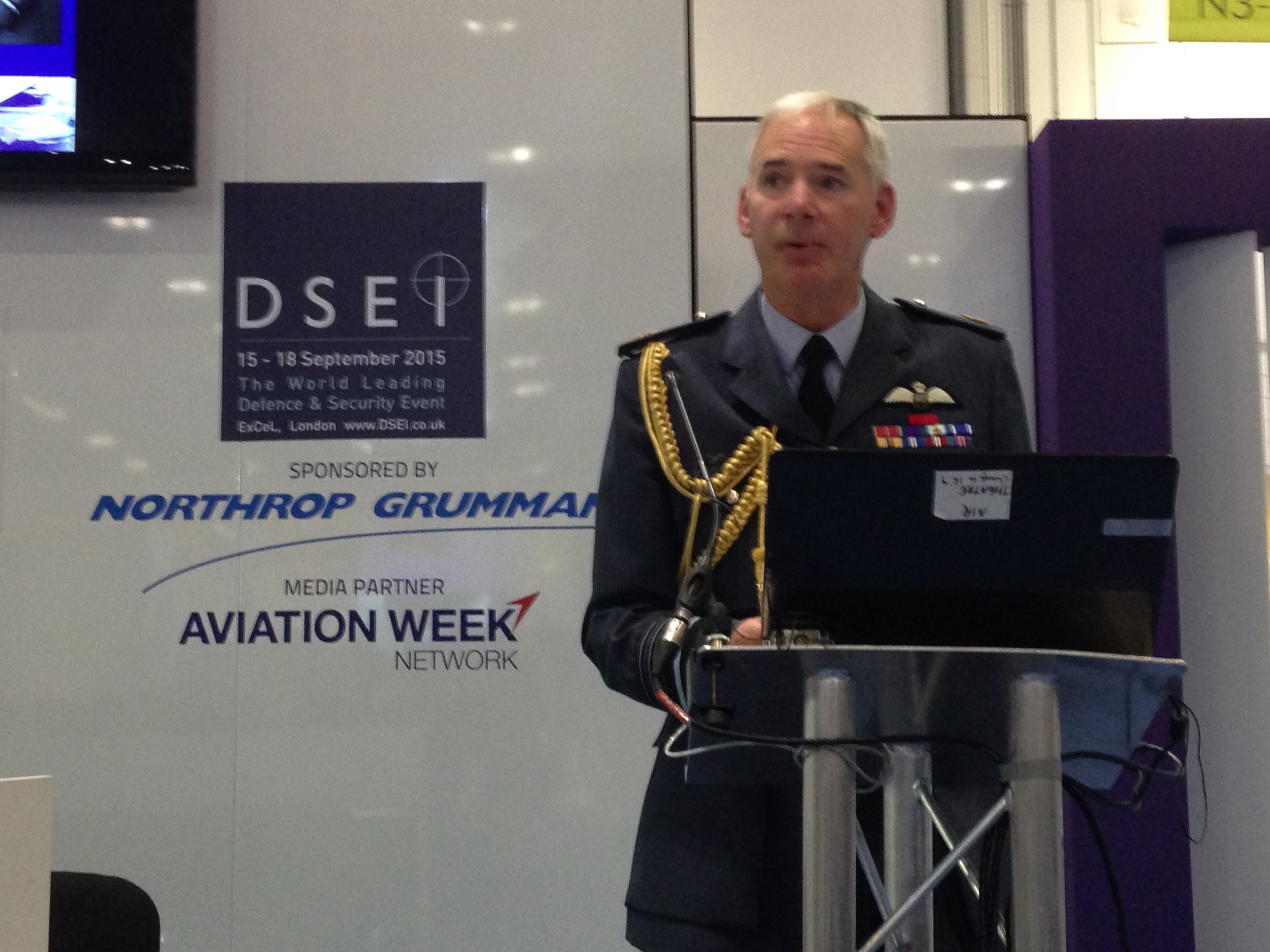 Other eminent Tory leaders such as Geoffrey Howe (before his regretted passing away in October of this year), Michael Heseltine, and Kenneth Clarke –all senior politicians with vast experience both nationally and internationally who still remember the dramatic efforts of national survival of all Britons during the eras of the Second World War and of the Cold War – disagreed at one time or another with this farcical and reckless approach of the Prime Minister and warned of its dire and irremediable consequences both verbally and in writing. But David Cameron is more interested in the ephemere unity of his fragmented Tory party and its continuing ability to monopolise the levers of power in London – even a much diminished London acting as an oversized capital of a Dis-United Kingdom without Scotland and its almost five and-a-half million citizens.

The only solution fully in accordance with the analysis and recommendations of our Chiefs of Armed Forces and capable of addressing the deeply interlinked internal and external security crises we are facing today in the UK, the EU, and beyond consists in the double-pronged transformative approach advocated by Gen. Barrons: a better interface between the political and the military, where London politicians act in accordance with the recommendations and advice of our outstanding military professionals; and a seamless integration and interface of our security and armed forces with our European and NATO allies. This presupposes not only Britain’s continuing existence as a strong United Kingdom in a United Europe capable of pulling its weight within NATO; but also of EU-wide institutions of governance solely capable of guaranteeing the implementation of indispensable accountability, legitimacy and control functions over our security and military networks endowed with vastly expanding means of accessing information and applying power both at home and abroad.

The image of the security environment and security needs painted by our outstanding British Chiefs at this year’s DSEI 2015 Exhibition and Conference presents us with a transformative, forward-looking, multi-dimensional canvass of the realities of the world we live in today. Our ability to ensure our citizens’ safety and security now increasingly depends on the interface and ease of communication between what used to be considered conceptually different and separate fields – internal security and eternal conflict, peace maintenance within our borders and conflict without, the virtually exclusive importance of state actors in real-time, territorial conflicts and the irrelevance of non-state players and virtual environments, and perhaps most importantly, the fundamental separation between an independent and self-sufficient UK military and the armed forces of our allies, even within NATO. This detailed analysis of our top military professionals and strategists is diametrically opposed to the short-sighted actions of our current political elites in London, who seem intent to go on wasting huge amounts of limited resources in duplicating hardware assets already deployed by our allies in the name of national independence, whilst at the same time gravely and perhaps irremediably endangering not only our sovereignty, but our very existence as a state by their cavalier and party-politically motivated actions regarding UK’s membership in the EU. These actions more than any external or internal threat are likely to lead to the break-up of the United Kingdom, the fragmentation of its territory and armed forces, and the descent into irrelevance of the UK military for our NATO partners and allies – as well as the loss of control over our borders, over internal security, and over our ability to develop resilient, effective and accountable services capable of guaranteeing peace, safety and prosperity for ourselves and our allies.

The horrific events in Paris on November 14, 2015 revealed to those who still harboured any doubts about it how well our enemies have understood and are capable of exploiting the concept of full spectrum environment in the information age - in a manner our current crop of politicians has not only not yet mastered but is actively blocking from emerging due to its members’ utter incapacity to think outside the national silos our Armed Forces chiefs were referring to with such sense of urgency and foreboding only a few weeks before these criminal acts took place so close to our borders. The seamless integration by terrorist networks of the national and international, domestic and foreign, real and virtual, European and Middle Eastern factors in achieving dramatic results with vastly asymmetrical resources represent a dire indictment of our political elites and the exposure of their glaring refusal to acknowledge and act upon that very “paradigm shift” explained in detail by Chief Air Marshal Gen. Pulford. Prime Minister Cameron’s solutions – a knee-jerk reaction in investing tens of millions of additional pounds in additional ships, missiles and planes; the indiscriminate and ineffective bombing of Syrian and Iraqi territory justified by delusionary claims that terrorist groups such as ISIS can be defeated solely from the air; and most dramatically, the utter refusal to cooperate in a meaningful manner with our European partners in addressing in a humanitarian and secure manner the vast flows of refugees unleashed by the ongoing conflicts in the Middle East whilst at the same time calling for integrated EU border security forces to be deployed at the national leaders’ whim, without any trace of legitimacy, accountability and democratic control – paint us in a corner without issue and discredit us entirely in the eyes of our European colleagues, our NATO allies, of global civil society and not least, in the eyes of most Britons themselves.

The most fascinating contrast at London’s 2015 Defence and Security Equipment International exhibition, the world’s largest fully integrated international defence exhibition featuring land, sea and air products and technologies, was the disconnect between the speeches delivered by Michael Fallon, The UK Secretary of Defence on the one hand, and all the Forces’ Chiefs on the other – including Gen. Nicholas Carter, the Chief Of General Staff and Gen. Richard Barrons, the Joint Forces Commander.

Whilst Michael Fallon concentrated his remarks almost exclusively on traditional military themes like innovation of UK technologies, procurement of expensive new weapons systems like next-generation frigates and submarines, increasing UK export abilities of weapons systems, and changing the army’s culture to improve UK armed forces capabilities and at the same time to make them most cost-effective, the Army chiefs had en entirely different priority. For them, the overwhelming focus of modernisation had to be the “single information global environment” in which the UK armed forces must now function, where state and non-state actors are fast becoming equally as important, where the boundary between peace and war, home and abroad is becoming increasingly fuzzy, and where the need for a continuum of operations requires a radical push for breaking traditional functional command silos and building an integrated open service architecture that can seamlessly integrate with and interoperate with Britain’s partners abroad.

This “whole service” approach to a continuum of state and non-state, real and virtual threats spanning the traditional national-international divide and the centrality of UK armed forces integration within the larger NATO architecture in order to achieve its aims in an effective and efficient manner was emphasised by each and every Chief over the four days of the conference. Gen. Andrew Pulford, Chief Air Marshal (pictured above), was quite direct in his conclusion: we face complex global challenges with no simple solutions where overseas and domestic threats are increasingly blurred; therefore, we must embrace the new paradigm of multi-domain approach to complex operations – not fight it.

General Richard Barrons, Joint Forces Commander, explained how the art of conflict is currently changing dramatically under our own eyes: it now takes a hybrid form, where cyber warfare is omnipresent and vital, and where social media is seen as a core aspect of modern armed conflict, thus leading to information centric operations where exploitation of information becomes the key to battlefield victory. Gen Barrons explained how intelligence now comes from the rapid and effective management of open space big data across real and virtual, domestic and international spaces, resulting in the urgent need to develop “full spectrum effects and dominance” that can be explained and justified to an increasingly global audience if ultimate long-term victory is to be achieved.

This ongoing change in the art of war, which he characterised as “evolutionary in nature but transformational in ambition”, requires two critical factors to come together in order to be carried out successfully: developing a better management interface between the political and military aspects of the “full spectrum operations” he outlined, and the increasing value of allies, especially of NATO partners, with the resulting need to develop new organisational structures allowing us to operate in a much more integrated and dynamic manner with them, at both the tactical and strategic levels.