It is only when one looks at Europe from high above, at night, that one truly understands that our continent is not just a geographical concept, but a pulsating, interconnected, living space without walls, checkpoints, or borders.

The centre of its population, where lights predominate almost exclusively even during the hours of darkness, is located within the bounds of the almost perfect parallelogram connecting London, Paris, Frankfurt, and Amsterdam - not coincidentally, the continent's four major commercial, financial, and transportation hubs. As one moves away from this area that never sleeps, major capitals and regional urban centres constitute the key nodes connected by smaller points of light stretching in all directions. From Lisbon to Leningrad and from Londonderry to Limassol, the natural unity and cohesion of this vast network constituted of thousands points of light cannot fail to startle and impress.

England has been at the heart of Europe for almost nine centuries, ever since Henry II Plantagenet founded the Angevin Empire that encompassed more than half of France's territory. The United Kingdom's history shaped the destinies of Europe, just as Europe's struggles deeply influenced the fate our our Sceptred Isle.

Above all, this map shows beyond any doubt that the very ideas of "leaving Europe" or trying to retrench ourselves behind our Channel moat make today as little sense geographically, economically, and politically as that of Scotland "leaving" the United Kingdom and erecting new barriers of trade, commerce, and education on our shared island home. 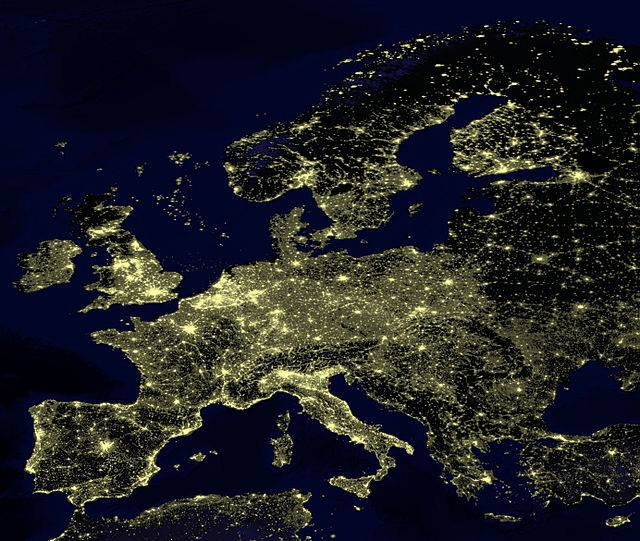 The era of borders-defined sovereignty is over. That of network-shaped connexity has already begun. We simply have no alternative to finding common solutions to the major challenges we face in the 21st Century,