Ever since we joined the EEC in 1972, we have been attempting to re-define the way we govern ourselves: a Scottish Referendum and a debate about our ongoing participation in NATO soon thereafter; a polemic about “getting our money back" from Brussels in the late 1980s; regional devolution and a Human Rights Act in the late 1990s and early 2000s; controversies about European Court of Justice decisions affecting our “Parliamentary sovereignty”; a second Scottish Referendum earlier this year; and now another plebiscite on whether we should remain at all within the European Union, or somehow “leave” – although we do not quite know exactly what that would entail for the UK – and for each of us. This disjoined, haphazard, incoherent and incomprehensible approach of successive British governments to the basic principles of how we should govern ourselves, and even to who “we” are as a community of citizens endowed with equal rights, responsibilities and opportunities can no longer continue. Its only achievements are to confuse us as to the real stakes of the reforms we need to discuss and carry out, and to allow the same Establishment elite to maintain its hold over our institutions of government, all whilst claiming that we have a truly democratic choice between real alternative visions put forward by our traditional political parties. 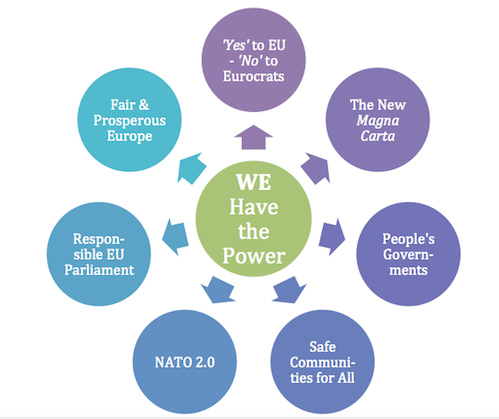 We don’t. The same tired, clueless, ossified, entrenched, mostly Oxbridge-educated, privileged elites keep misgoverning us, whatever the outcome of our quadriennial elections, where our input is limited to putting an “X” next to the name of the person we wish to see elected as Member of Parliament in our riding, and where actual governments and the distribution of cabinet positions is decided behind closed doors and away from the public view by elected and unelected grandees whose primary concerns are their own positions, powers, and privileges.

The “Stronger United” campaign brings these issues of governance, participation, democracy, and rights together in a clear, coherent, and comprehensive 8-Point Plan for Reform. In simple terms, it states that if we wish to preserve and promote the equal freedoms, opportunities and prosperity we have prided ourselves with until now, we need to profoundly re-think and re-form the way our existing institutions of governance interact and function. In a rapidly changing global environment, where time and distance have been reduced to almost nil and both human and natural risks have increased to levels until recently simply unthinkable, we cannot continue to let ourselves be ruled by 16th Century "sovereignty" theories and 17th Century political institutions according to 18th Century rules of procedure, 19th Century limited democracy values, and 20th Century hierarchical political parties.

We must, together, as free and equal citizens, make a conscious decision to resolutely step into the 21st Century and address all these governance issues – economic, political, cultural and military – in a clear, open, comprehensive and coherent manner. This is why the upcoming UK Referendum on EU Membership cannot be the end, but only the beginning of our ongoing struggle for “A Stronger UK in a United Europe”.

Putting Principles Into Action: Eight Steps to A Better Britain

Eight Point Action Plan: Each proposal has specific policy, institutional and civil society implications, building on each other in terms of scope, complexity, and impact on our communities and our world:

1. 'YES' to Europe - 'NO' to Eurocrats:  Vote"Yes" in the BREXIT referendum AND take leadership of the ensuing debate for needed reforms in the UK and EU.

2. WE Have the Power: The Tools to Do the Job: Connect all groups and individuals calling for democratic, meaningful changes in the way we govern ourselves and start implementing reform from the grassroots up.

3. The New Magna Carta: Strong Nations in a United Kingdom: Re-design and re-connect all existing UK institutions as part of a more flexible, more accountable, more efficient network of governance where all levels work together in a democratic manner for the good of all citizens.

4. People's Governments: National Parliaments - Regional Assemblies: Establish a modern, coherent, strong United Kingdom where recognition of our constituent nations, implementation of efficient administrative institutions, and promotion of individual rights and responsibilities go hand in hand to meet the challenges we face in the 21st Century.

6. A Fair and Prosperous Europe:  Create a prosperous future by developing principles of government capable of fairly and efficiently distributing problem-solving powers to different levels of government in a manner that gives citizens as much input as possible in the way such problems are resolved and solutions implemented.

7. Safe Communities for All:   Focus on real people instead of imaginary borders by investing time, resources and care in providing real hope and equal opportunities in a fair and equitable manner to those who feel excluded, voiceless, and forgotten, no matter where they are born and where they live, in a way that respects and promotes the equal dignity of all human beings.

8. NATO 2.0:  Move from NATO 1.0 to NATO 2.0 by bringing under the NATO umbrella those military, security, finance and trade matters that can only be solved effectively at a trans-Atlantic level and transform this organisation into a democratically-accountable institution, with elected representatives and responsible leaders that can meet head-on the challenges of our globalizing world and implement effective and sustainable solutions for Europe, North America, and beyond.

Where Do They Stand on the Issues?

We shall portray below, as fairly and critically as possible, the current position of various organisations in Britain's political sphere and civil society, as well as in the international community on Britain’s membership in the EU. Unfortunately, as you shall see, most of them remain caught within the sterile, false dichotomy of the Stay In / Leave debate, whilst failing to examine the larger, real issue that constitutes the focus of our approach: how to set up innovative problem-solving institutions at local, national, European, Trans-Atlantic, and ultimately global levels that are receptive and responsive to our needs, to our plans, and to the pressures of the common environment we all are destined to share.

Labour: If you seek power

Greens: All about the …Environment

Unionists: Beneath an Irish Sky

Young Voters: "Do we matter?"

Visible minorities: All over the map

Professionals: On Balance of Probabilities

The City of London: Towering over Europe

The Media: The Infotainment Society

China: Hong Kong on the Thames

The Monarchy: We Are Not Amused